Something old, something new...

...nothing borrowed, some parts blue.  Not quite as catchy as the original.

Using some of my old license plate stash to make something new.  This one is the first in a series of at least three.  Having fun painting and playing around.
Posted by Shelly at 9:22 AM 8 comments:

And the winner is...

Well, this was supposed to happen Friday, but I got busy and waited until today to do the drawing for my thank you giveaway.

AND, another thank you for all the lovely comments.  I'd hug you all right now if I could, so consider yourselves properly squeezed.

I put all of your names on a list and let the random number generator (random.org) do the work.  Without further ado, the winners are....

Congratulations!  I'll send you emails so  you can send me back your addresses.
Posted by Shelly at 12:15 PM 1 comment:

I just had such a strange and wonderful moment.  I was looking at my art blog statistics, and I saw that Pinterest was one of the sources for people linking to my blog.  Holy moly, you can't believe how surprised I was when I clicked on the link and saw this! 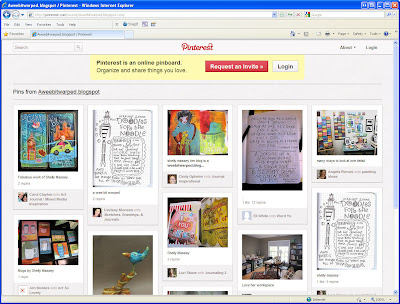 You can see it for yourself right here --> LINK

One of the pins (not shown above) had more than 20 repins.  Holy moly again.  Between that and the fact that I'm up to 30,000 page views on the blog and just one person away from 200 people who like my facebook page, I'm blown away.  I'm just so thankful.

And to express my thanks, I'd like to have a little giveaway!  I'm giving away these two little original paintings away to two of you sweet people.  Just leave a comment here on this blog post or over on facebook.  If you comment "anonymously" (meaning that you don't have an account), just be sure to leave your name so I know who you are!  Next Friday (January 27th), I'll draw two names and announce the winners! 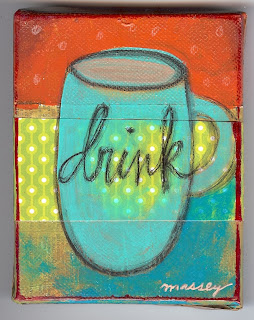 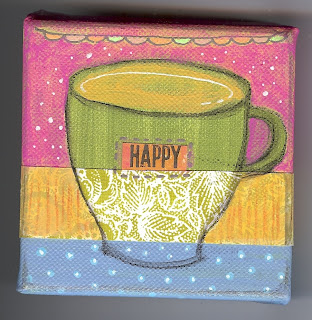 Thank you again so much.  I hope you can imagine just how much your support means to me.
Posted by Shelly at 7:14 AM 16 comments: 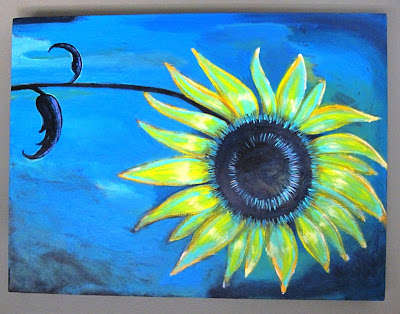 Oh how I wish I knew why Blogger insists on turning my photos sideways.  Anyway...

After I made the painting above, my husband told me that when I'm moody, I make better paintings.  Well, in his defense, that's not exactly what he said.  He said that when I'm in a happy mood, I make happy, whimsical work.  And that when I'm frustrated or sad, I make more detailed, serious work.  Which is the work of mine that he likes for the most part.  (He has some good reason to say this, I suppose, because I was super cranky about something just before I made this painting.)

I'm a wee bit moody lately, which might explain why the painting I was showing you last time has now become the one below instead.  Mainly I just liked the size of the canvas, and I felt like continuing my sunflower series, but perhaps mood had something to do with it.  This is just the first layer, so I'll have to show you what it looks like after a few more sessions. 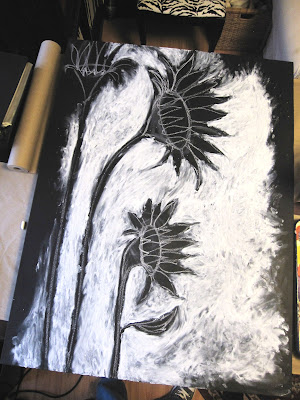 2012 is starting out kind of interesting.  A mix of work, art, home projects, cleaning, and rearranging.

On the art front, I decided to try to finish up some work that I've had in progress.  I've been fighting with the painting below for about five years. Ok, it sat in the corner for most of those five years, but still. Enough already. Here's how the battle went.  I painted some background... 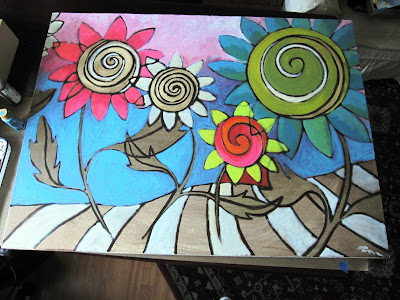 Then the blue took over. Blech.  My paintbrush made me do it, I swear. 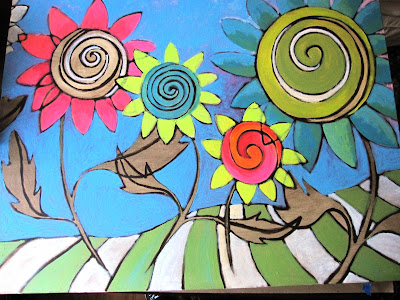 The gesso comes in to try to help.  Take that, blue background! I'll show you. 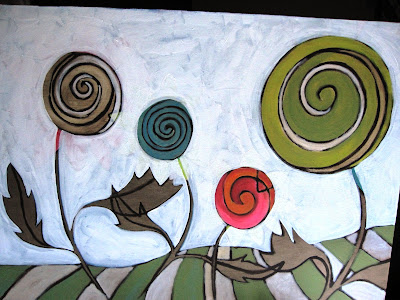 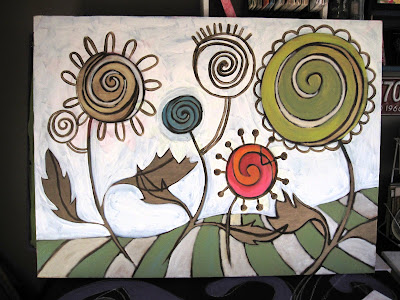 Ummm... the blue took over again.  And so it sits (for maybe another five years). 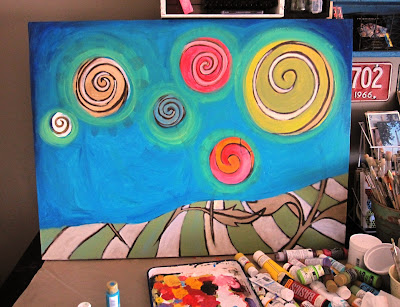 I've been working on a few other things.... My first chronological journal which also happens to be transparent/translucent in the center.  I started this as a class idea (which maybe I'll teach someday), but for now it's going to be my account of 2012. 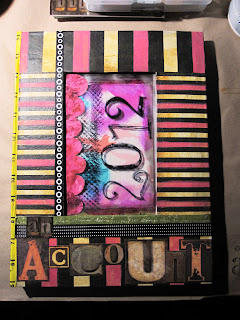 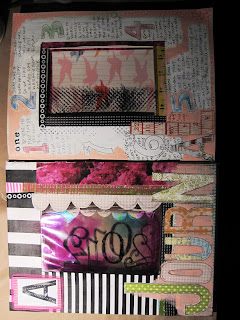 And I rescued this project.  I originally made it as a calendar entry for CPS, and it had words on it to match their theme.  Honestly I like it much better without the words.  That's very unusual for me, but I always thought the words weren't the right words for this piece anyway.  Maybe I'll make some other ones, and maybe even get them framed in a shallow shadowbox. Whoohoo! 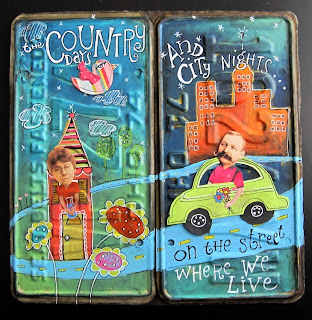 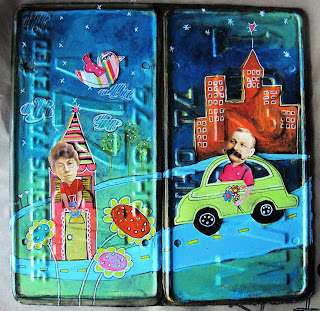 And right now I'm off to do a painting project of a different sort.  My office has had paint swatches on the wall for at least 6 months (maybe longer).  Doug picked up the paint over the weekend, so I'm going to at least get started.  No "before" photos because this room is trashed (and by trashed, I don't mean cute piles of stuff sitting around... I mean a full on disaster area.)  Wish me luck.
Posted by Shelly at 10:49 AM 5 comments: