Can I tell you a secret?

Do you promise to not think I'm losing it? (Well, I am... a little bit.)
Here goes...
You know the messages I put on my artwork? Fly... Dream... Seek Big Adventures? Yep, those messages. Well, I put them out into the world for you, but...
I make those messages for me.
Because I need to hear them and see them. OFTEN. They keep me moving forward. They remind me of where I want to go and why I am here. They keep me sane. 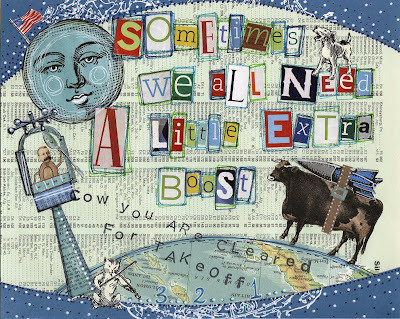 What IS happening right now is that I'm going through a time of complete upheaval because my job is taking over my life. There's no breathing room, no thinking room, no peace. NO ART.

I have to think this is only temporary. My sanity REQUIRES me to think this is only temporary. If I've learned anything over the years it's that these kinds of upheavals don't last forever. There has to be a break. I'm just trying to keep it together until that break appears. I'm trying to be nice to myself and keep all the other pressures to a minimum wherever I can. Which isn't easy. But I'm going to keep trying.
Posted by Shelly at 4:37 AM 13 comments:

There's still time to register for Artfest 2011! Here's the link to the class list --> LINK!
And direct links to my classes:
License to Create
Game Time
Teesha opens all of the registrations at the same time on September 3rd, and then starts placing people into classes until they fill up. And they do fill up! :)
Even if you're not signing up for my class, I'd love to know that you're going to Artfest! One of the best parts of the event is meeting everyone.
EXCITED!!!!! Don't miss out on THE event that truly changed my life. Hope to see you there!
AND...
I found this while I was getting the links for my classes.... the artist photos. It's funny to see my photos mixed in there with all the other artists. It made me laugh.
Posted by Shelly at 5:09 AM 2 comments:

There and Back Again: The Art Booth Experience

I survived my first arts and craft festival!
Ok, that wasn't really how I wanted to start my blog post about the experience, but that's what came out when I started typing.
Let's try that again...
I won an award at the Salt Fork Arts and Crafts festival! (Celebrate the successes, learn from the "failures", right?) 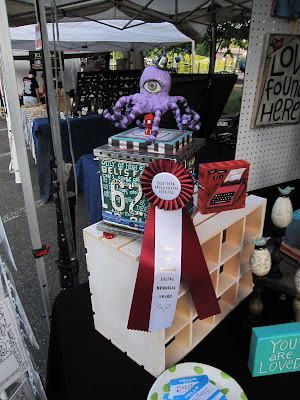 I was very honored to win the William Saling award titled "The William Saling Memorial Award; In memory of long-time exhibitor Bill Saling; for an Amusing, Delightful Work of Exceptional Craftsmanship" for my license plate box. William "Bill" Saling was an exhibitor at the festival for 30 years. The greatest part about winning this award was that it came with stories. Several people stopped by to tell me about Bill Saling and how humorous and entertaining he was. Evidently he was quite the well loved character. As his art, he made wood pieces including clog dancers. Bill passed away a few years ago. From one of the stories I heard, he passed away at his desk while creating his art. I managed to find some of his clog dancers online, and was even able to order one. This one... :) 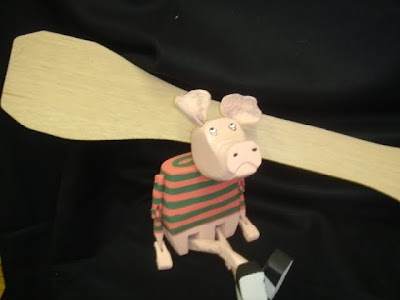 I would have loved to have met Bill Saling, but I'll have to settle for reminding other people of him.

Ok, so finally... the booth. I'm a little hesitant to show you because it didn't turn out quite as I had planned. Oh, and the photo I managed to take was after a larger piece sold (the white empty board in the back left) which left a gap. I took down the that piece of pegboard after that and put some small paintings on the black shutter. It would have been nice to have down at least the back wall to have a white background, but it was tooooo hot. I had to take advantage of whatever breezes were coming through to cool down. 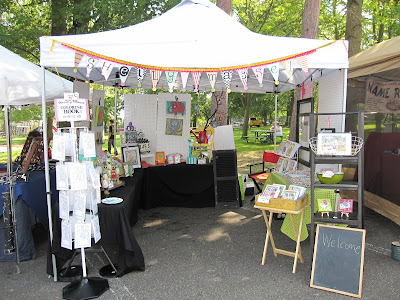 Overall, I did ok with sales... there were ups and downs, and overall I would have liked to sell more, but for my first show, it was ok.

- A lot about what I need to think about for having a booth on a hill. I really hadn't planned for that, and it threw everything kind of out of whack

- I need a better way to create wall space too while also planning for the curveball from being at an angle.

- I need to put something more "impactful" visually on the front of the booth. Some of the vendors had signs you could read from two miles away. Ok, maybe only one mile away.

- Oh, and did anyone know that August is hot? :) We did get to sweat a bit. Probably didn't hurt me to lose a few pounds of water weight.

- I need to spend more time figuring out if an event is right for me. It's kind of hard to tell, so maybe it will be a trial and error for the first year. I did get some helpful advice about events where I might fit in from some people who visited my booth.

Most of the people who stayed for a bit had very nice things to say. Here are a few of the nice things I heard: Clever, talented, fun, happy, whimsical.

Here are some of the things that I'm still working on interpreting: Different, strange, and never seen anything like this before. I'm going to take all of those things as a compliment for now.

In other art related news:

2) I got an invitation today to exhibit at the Oglebayfest in Wheeling, WV at the beginning of October. I'm working to figure out if I'm going to do it or not. It has mainly been a crafts event in the past, but they're working to make it more of an arts event. I probably fit somewhere in between (Artsy Craft? Crafty Art?) , so it might work for me, but I still have concerns that I might not fit in.

In other only somewhat related news:

1) I got a promotion to manager. My first day was yesterday. This is somewhat related to my art because it probably will mean I'll have less time for it. Instead of spending my lunch hour creating art, I'll probably be in a meeting. We'll see...It's feeling a bit overwhelming right now, but I'll wait to let things settle down a bit.

2) I have a lot of travel in the next couple of months. The upside is that I'll get to see friends - especially my dear friend Lea who is pregnant and has another wee one that I haven't met yet. Can't wait! 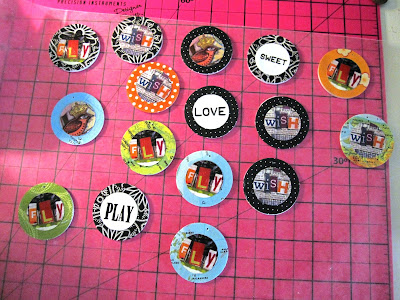 It's poker chip pendants time. I like how these look, but they are frustrating me a bit because I don't like glue on my fingers. Lots of finger wiping going on around here... I'd better just get used to it because I think I'm making pins too. 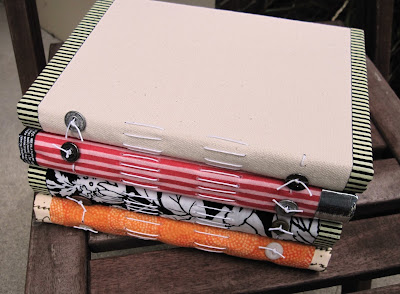 Made four journals so far today using the technique I described a few days ago for the covers and the binding technique I learned at Teesha Moore's class. Three more to go (for now). :)

A message to me + you 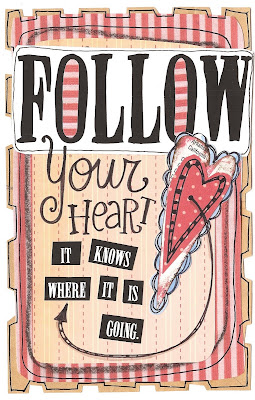 Greeting Card Design
I'd be fibbing if I told you I wasn't a little stressed about the art fair preparations. So many projects going on at the same time, but none of them finished. I'm trying to keep my wits about me and remind myself to just keep moving ahead. In the past, I've let myself be paralyzed by huge projects, and then I found myself rushing at the end to get it all done. I've been trying to tackle all of the art fair work at a pretty steady pace, but it still feels like a lot. Whenever I felt the urge to run away from it, I just find at least one manageable task to do that keeps me moving forward towards my goal. Here's how my brain works now:

Me in panic: Feel frustrated about a creative-type project?
Me in response: Stuff greeting cards in envelopes or some other mindless task that has to be done.

Me in panic: Back aching because I've been bent over a project for too many hours?
Me in response: Sit on the couch and doodle in the art fair coloring book I'm working on.

Me in panic: Completely out of ideas?
Me in response: Look through sketchbook for five minutes and get inspired.

Me in panic: Want to run away or just take a nap to ignore the huge pile of work?
Me in reponse: Walk in art room and pick just one small thing to do. One small thing leads to working on twelve things, and voila, work gets done!

As long as I'm moving forward, I'm pretty sure it's all going to turn out in the end. 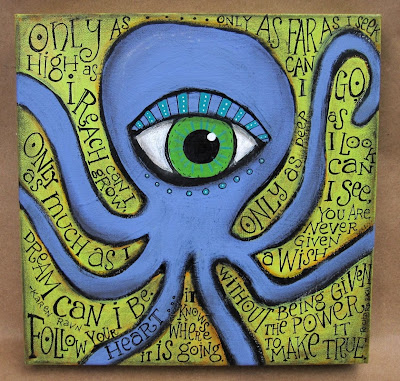 Miss Harper slept in this morning until 8:30. As much as I like to hang out with her in the morning before she goes over to Grammy's house, I also like some good early morning art time.

Repeated some quotes that I seem to be addicted to. They just ring true to me. Whenever I feel like I don't know where I'm going, if I read one of these quotes, I get back on track.

The quotes don't read quite right... I probably would have done them differently if I was doing it again, but then... it was more the process of writing them down for me than about the final piece. I might have to make a "how to read this painting" accompanying note for this one. :)

Happy dreaming to all of you!
Posted by Shelly at 8:30 AM 1 comment:

Managed to squeeze in one more. Not done, but I wanted you to know... 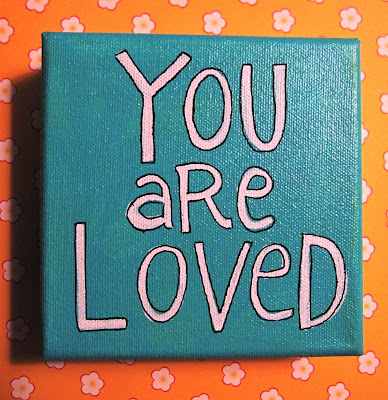 Who needs to eat anyway?

Today's lunch time project. Thank goodness for heat guns. Still working on the eyes of these guys a bit, but getting there... 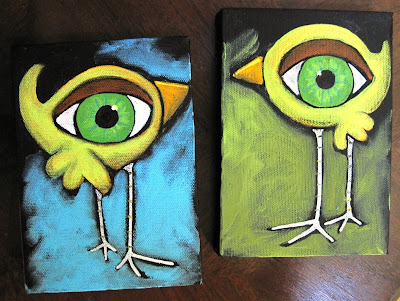 Posted by Shelly at 2:39 PM No comments:

Trying some small paintings for the art fair. I'd say they are still drafts at this point, but I thought I'd share anyway. 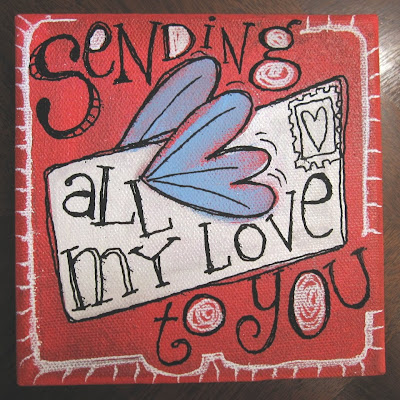 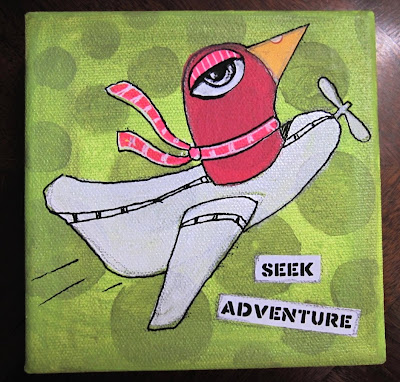 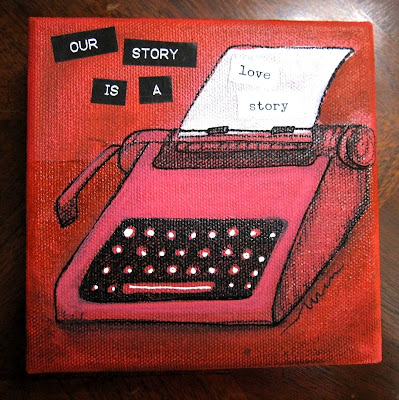 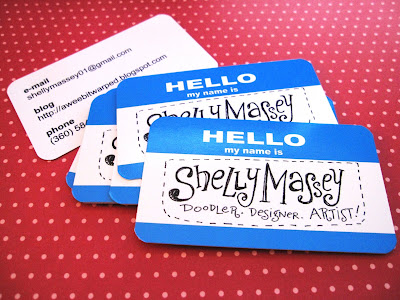 My new business cards arrived today. Glossy and fun. I was going to put one of my collage images or something on the front with my contact info on the back, but then... I saw the "HELLO my name is" background. And it just had to happen. They kinda make me laugh a little. And that seems like a good thing.

And the countdown begins...

On Friday, I was officially accepted into the Salt Fork Arts & Crafts Festival in Cambridge, OH. AND it's in less than two weeks - August 13, 14, and 15. HOLY MOLY.


That means there's a whole lotta stuff going on around here. We set up the new tent canopy over the weekend and figured out how I'm going to hang stuff for "walls". Now, it's time to just keep cranking out work whenever I can! 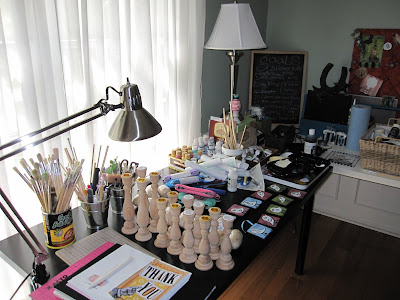 
The hardest part for me to figure out is the pricing. If anyone has any suggestions, let me know!!!
Posted by Shelly at 9:40 AM 7 comments: